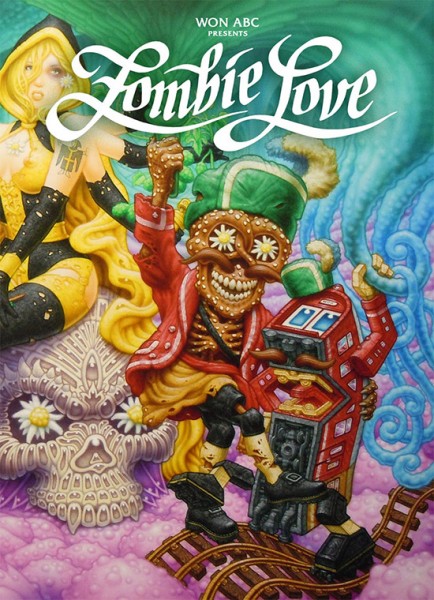 ZOMBIELOVE follows the early bestseller COLOUR KAMIKAZE by graffiti artist WON ABC from Munich, Germany. WON is back with a new story about zombies and other undead creatures. Popular international artists such as HR Giger are deeply impressed by WON’s unique and morbid style.

The illustrated ZOMBIELOVE story covers 73 pages. Chapter one sets the scene for a zombie story in 2101, featuring a versatile character through various types and techniques of illustration. A scientist accidentally brings dead people back to life. The problem this creates for the citizens of Paracity goes beyond the zombies’ passion for graffiti and vandalism. By biting humans the zombies multiply and become a zombie epidemic, which soon threatens to exterminate humanity. Although the president succeeds in the quest to eliminate the zombies, an extraterrestrial creature seems to start the apocalypse after all. The story explores the philosophical questions of humanity in relation with their environment. Through the themes of graffiti and vandalism the interaction with zombies play with peoples’ perception of illegal painting. The perspective on good and evil, the deeper meaning of existence, death and the undead – these are the subjects at the core of the ZOMBIELOVE story.

The second and final chapter of the book features an 80-page retrospective of WON’s work over the last 13 years in symbiosis with the storyline of ZOMBIELOVE. WON spread the zombie virus worldwide through his paintings, sculptures, train graffiti and other activities. Countries such as the United States, Cuba, Jamaica and many more have been infected…